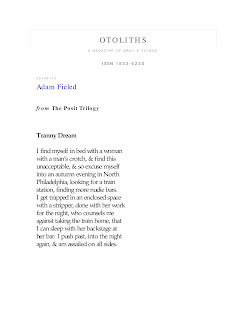 Also interesting on Trove (NLA): the tables of contents for issues 25, 30, and 32 of Otoliths, respectively, which act as lead-ins to the entire issues archived. 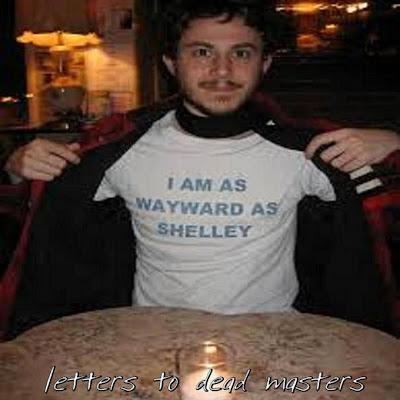 Letters To Dead Masters: An Epistolary Novella by Adam Fieled has sprung back to life, both in pdf form and, newly, on mp3, here and here. 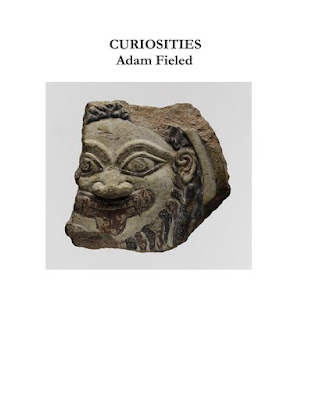 From Curiosities on mp3, including Odes and Ballads. 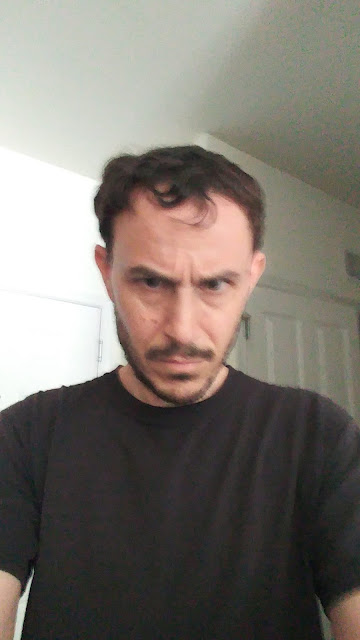 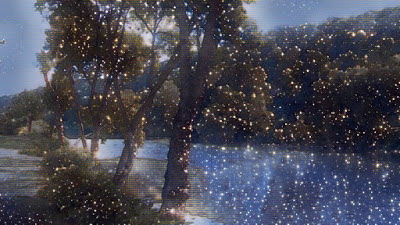 Two new Odes up in X-Peri. Many thanks to Daniel Y. Harris. 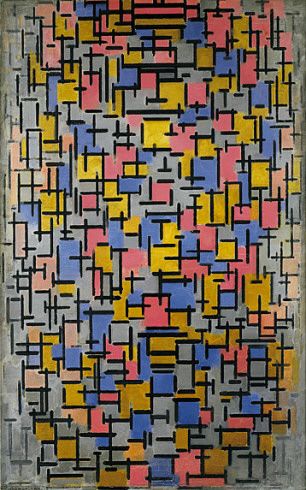 
Elucidating Derrida and Differance: Lecture Given at Temple University, 10-16-06 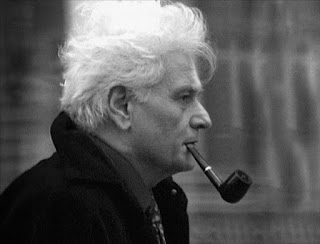 I gave this lecture at a graduate seminar at Temple. Fourteen years later, most of it still seems germane. 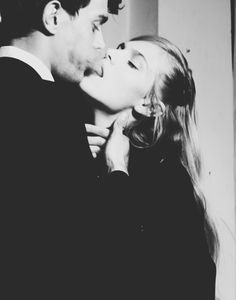 When what you do in the world is deal, your
deals define you; better not get too attached to
anyone else. Ruth's voice, her presence, "aura,"
were all fire & ice; the promise of warm
sensuality somewhere, strong thunderstorm
temper, belied by flaxen-headed good looks;
but her dealer status put a perma-freeze
on all this. She lunged towards me at an Outlaws
party (she dealt to & with them), & beyond all laws,
covered my mouth & shot-gunned green smoke into my
lungs. I myself was too stoned to respond. Yet, high
or not, Ruth made a mark on my soul from a deep
place that night. It takes one to know one, right? I
never saw Ruth again, didn't need to; we had our fling. 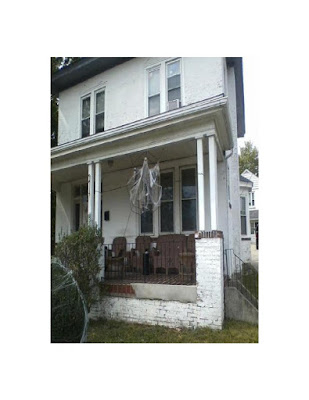 In shifting winds, I still stand proudly behind my rendering of the 2000-Teens in the United States; a rendering meant to last. And still improving. 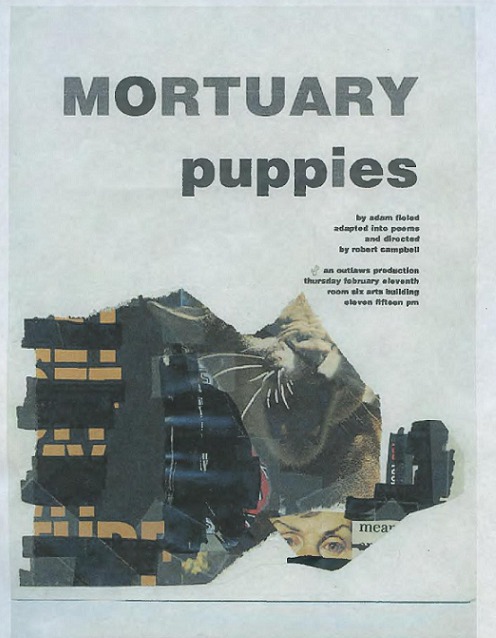 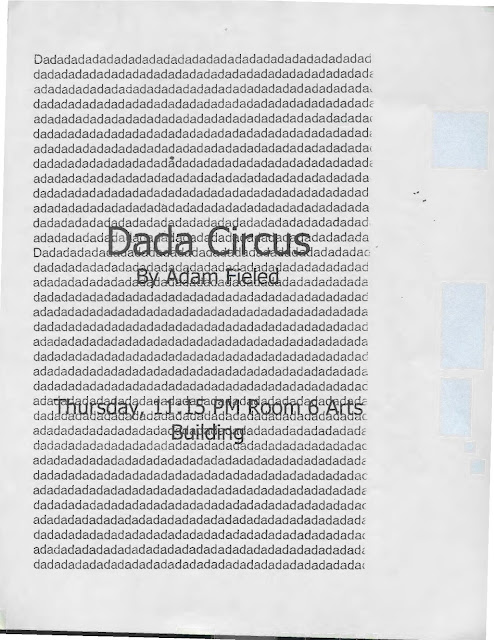 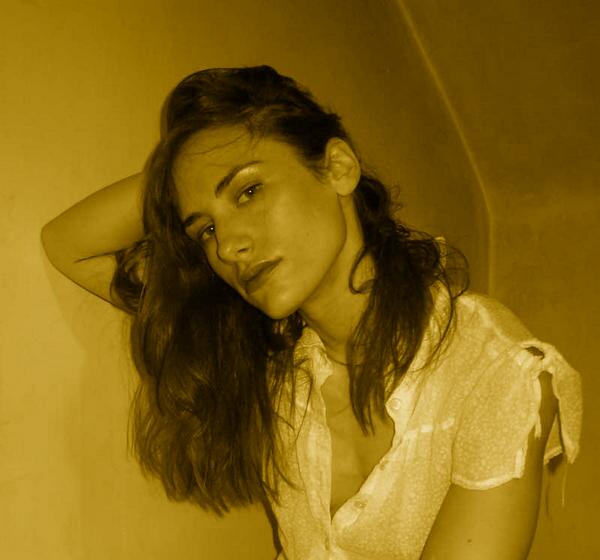 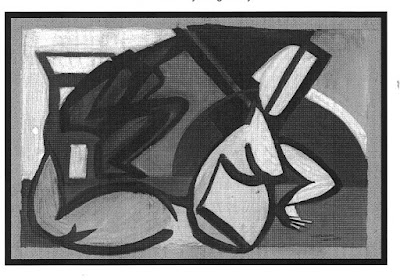 This: an illustration used in the first edition of Vlad's Derelict. Now: "No. 105" from Derelict on P.F.S. Post. 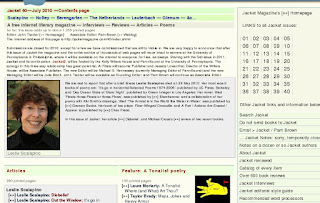 It's precisely ten years since Jacket Magazine ended. Does it seem like a long time? Rather. Yet, as a linchpin holding together the Aughts in poetry, Jacket was nonpareil. Binding together entire continents, North America, Europe, Australia, making avant-garde (and sometimes mainstream) poetry an international community, and serving as a center for the entire enterprise of poetry, Jacket was not just "big," it was a phenomenon. The phenomenon started from editors John Tranter & Pam Brown, and made it so that no one could accuse Internet Age poetry of provincialism, or of being regressive.

For someone on my way up in the Aughts, Jacket meant a new start, something fresh, away from old hat Amer-Lit publications like Poetry, APR, and Prairie Schooner, all of which did manifest sure signs of provincialism, regressive clannishness, and fetid insipidity. Among other things, I had two sets of poems in Jacket, one in issue 31 and one in 40 (the final issue), and both allowed me to feel my oats as a poet and writer wanting to lay down several ambitious gauntlets at once.

It's my hope that no one will forget the phenomenal popularity of Jacket in the Aughts. What will be done with Jacket, forty issues and maybe ten thousand pages worth of material, who knows. It's all already in Trove, the National Library of Australia site. For me, it's about wondering what's in there, what the secret gems were which may emerge over a long period of time. The task of weeding through the Jacket morass is a historical one, and involves "world" history, not merely American or European. Ten years later, we could use another Jacket now; a shot in the arm to enliven sleepy times. Will we get it?